To describe these colligative properties, let’s start with a review of what happens when a liquid is added to a closed container. Picture a container that is partly filled with liquid and then closed tightly so that nothing can escape. As soon as the liquid is poured in, particles begin to evaporate from it into the space above at a rate that is dependent on the surface area of the liquid, the strengths of attractions between the liquid particles, and the temperature. If these three factors remain constant, the rate of evaporation will be constant. 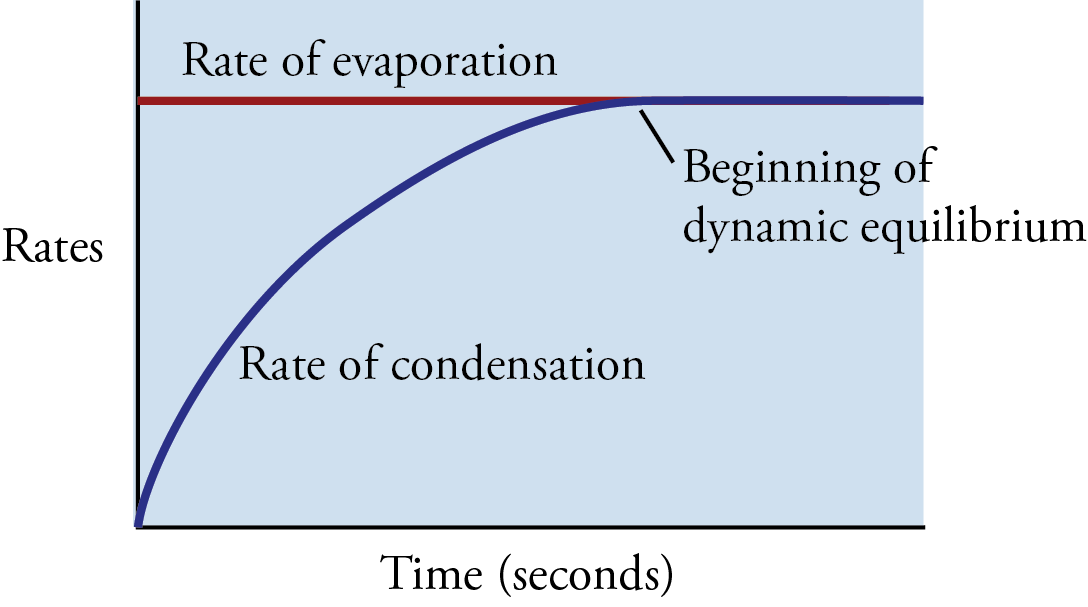 
Now let’s look at what happens for solutions instead of pure liquids. There are three general types of solutions. The first type is a solution of a nonvolatile, nonelectrolyte. An example is sugar in water. Nonelectrolytes dissolve as uncharged molecules and thus do not cause water to conduct electricity. Water soluble molecular compounds other than the acids and bases are generally nonelectrolytes (e.g. glucose or sucrose).

The addition of the nonvolatile, nonelectrolyte solute causes the vapor pressure of the solution to decrease. There are two reasons for this. The first is that the nonvolatile solute does not contribute to the overall vapor pressure, and the second reason is that the nonelectrolyte particles take some of the positions at the surface of the liquid, decreasing the number of solvent particles at the surface and decreasing the rate of evaporation. As the concentration of the solute increases, the effective surface area for the volatile solvent decreases. Because the rate of evaporation is lower, a lower rate of condensation is necessary to get to the stage where the two rates are equal. A lower concentration of vapor and therefore a lower vapor pressure would be necessary to reach this lower rate of condensation. If the solute-solvent attractions are the same strength as the solvent-solvent attractions, the following equation describes the vapor pressure of the solution.

PA = the partial pressure of gas A in the solution

XA = the mole fraction for gas A

PA° = the vapor pressure of pure A

ΔTb = the change in the boiling point temperature

ΔTb is proportional to the concentration of solute


Exercise 1: Calculate the approximate boiling point of a solution that contains 1.5 g of the nonelectrolyte glycerin, C3H5(OH)3, in 30 g of water. (The boiling point constant for water is 0.512 °C/m. Assume that the glycerin is nonvolatile and that the solution is ideal.)

The van't Hoff factor accounts for this greater effect on colligative properties by electrolyte solutes.


For solutions of two volatile, nonelectrolyte components, both components contribute to the total vapor pressure. An example would be alcohol and water. For an ideal solution, the total pressure can be calculated from the following formula. It is called Raoult's Law.

There are two types of deviations from ideal behavior. When the actual pressure is greater than the total pressure calculated from the above equation, we have positive deviation from Raoult's Law. This happens when the solute-solvent attractions are weaker than the separate solute-solute and solvent-solvent attractions. The solution cools as it forms because of the decrease in stability. Ethanol dissolving in water is an example.

When the actual pressure is less than the pressure calculated from the above equation, we have negative deviation from Raoult's Law. This happens when the solute-solvent attractions are stronger than the separate solute-solute and solvent-solvent attractions. The temperature rises as the solution forms due to the increase in stability. An example is formic acid dissolving in water.

The addition of a nonvolatile solute lowers the freezing point of a solution compared to that of the pure solvent. As the concentration of solute particles increases, it becomes more difficult for the solvent particles to find positions in the crystal lattice. Thus, the particles must move more slowly to solidify, and the freezing point decreases.

Another way to explain this is to recognize that the freezing point is the temperature where the vapor pressure of the liquid and the solid are equal. The following phase diagram shows that the temperature at which liquid and solid are in equilibrium is lower for a solution of a nonvolatile solute than for the pure solvent. 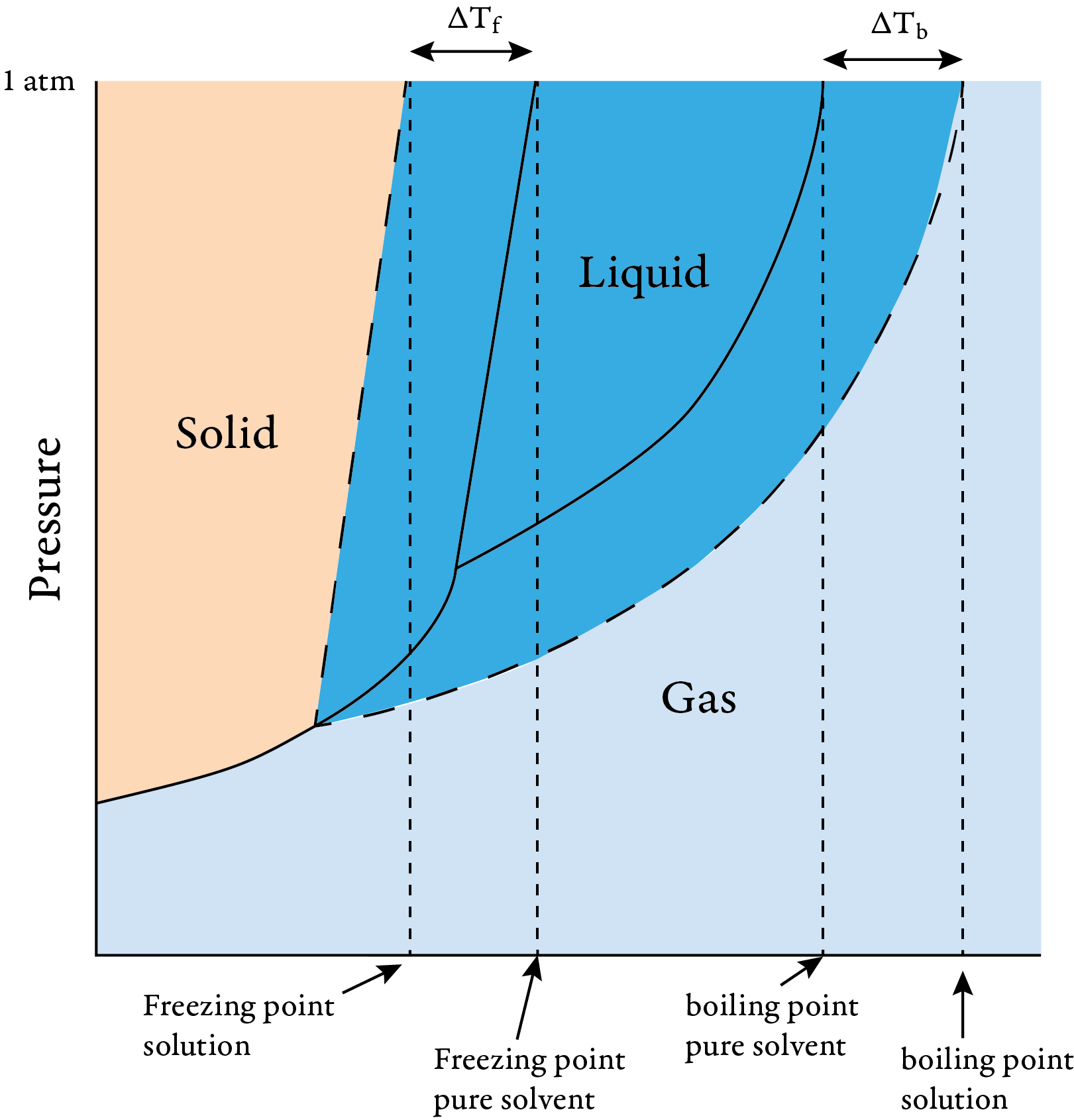 
Calculations involving changes in freezing point can be done with an equation that is similar to that used for boiling point elevation. Freezing point constants and van't Hoff factors can be determined from tables.

ΔTf = the change in the freezing point temperature