Although the ideal gas model is very useful, it is only an approximation of the real nature of gases, and the equations derived from its assumptions are not entirely dependable. As a consequence, the measured properties of a real gas will very often differ from the properties predicted by our calculations. Let’s look at some of the reasons for these discrepancies.

Picture yourself riding on an H2O molecule in water vapor heated to a relatively high temperature. (The term vapor is commonly used to describe a gas that is derived from a substance that is a liquid at normal temperatures and pressures.) As your H2O molecule passes close to another one, the two particles may experience a mutual attraction. As long as the temperature remains high, however, the rapidly moving water molecules break the attraction almost immediately and continue on their separate paths. Because, the particles in a gas at high temperature spend only a small fraction of their time experiencing these short-lived attractions, the effect of the attractions on the properties of the gas is negligible. We can therefore consider a gas at high temperature to be an ideal gas, with no attractions between the particles.

When the temperature of the water vapor decreases, the water molecules move more slowly, and it becomes more difficult for them to break the attractions that form between them. Thus the particles of a gas at a lower temperature spend a greater portion of their time attracted to other particles. The ideal gas model is based on the assumption that there are no significant attractions between the particles. Therefore, the lower the temperature, the less a gas behaves like an ideal gas.

When the attractions between its particles are significant, the measured pressure of a real gas is less than the pressure predicted by the ideal gas equation.

The lower the temperature of a gas is, the more attractions there are between the particles, and the more the real or measured pressure deviates from the pressure predicted by the ideal gas equation.

Figure 1:   Preal is less than Pideal   In a real gas there are attractions between the particles. At the instant before a particle collides with a wall of its container, the particles behind it pull it back, decreasing its velocity and decreasing the force of its collision.

Figure 2:   Increased Concentration of Gas Leads to a Greater Difference between Real and Ideal Pressures   The greater the number of particles per unit volume, the greater the number of significant attractions between a particle just before it hits the wall and the particles behind it. This leads to a greater pull toward the center of the container and a greater difference between the real, measured pressure and the ideal, calculated pressure. 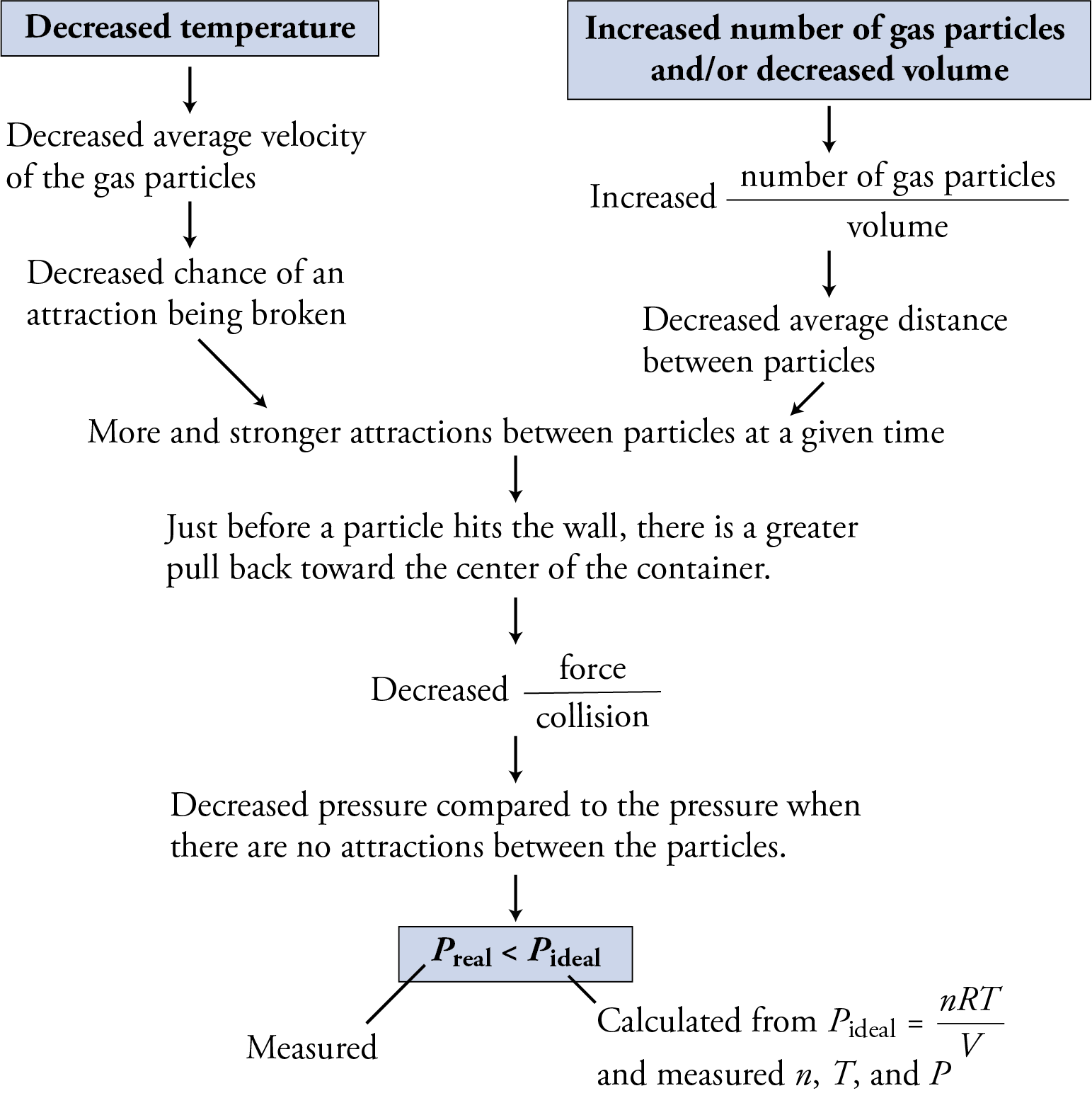 When a gas behaves like an ideal gas, we can calculate its volume by measuring its temperature, pressure, and moles and plugging them into the ideal gas equation. When the concentration of a gas is very high, however, the real or measured volume is greater than the volume that would be calculated from the ideal gas equation. The reason is that small as the particles of a gas are, they do constitute part of its volume. In other words, the real volume of a gas is equal to the volume that the particles themselves occupy plus the volume of the empty space between the particles.

As the concentration of a gas increases-either because more gas has been added to the same volume or because the gas has been compressed into a smaller volume-the percentage of the volume occupied by the particles increases. This leads to a greater difference between the real, measured volume and the calculated, ideal volume (Figure 4).