A reasonable Lewis structure for the nitrate polyatomic ion, NO3−, is below.

This Lewis structure shows two different types of bonds, single and double. Because it takes more energy to break a double bond than a single bond, we say that a double bond is stronger than a single bond. Double bonds also have a shorter bond length, the distance between the nuclei of the two atoms in the bond, than single bonds do. Thus, if the above Lewis structure for nitrate were correct, the nitrate polyatomic ion would have one bond that is shorter and stronger than the other two.

This is not the case. Laboratory analyses show all three of the bonds in the nitrate ion to be the same strength and the same length. Interestingly, the behavior of the bonds suggests they are longer than double bonds and shorter than single bonds. They are also stronger than single bonds but not as strong as double bonds. In order to explain how this is possible for the nitrate ion and for molecules and polyatomic ions like it, the valence-bond model had to be expanded.

We can draw a Lewis-like structure that provides a better description of the actual character of the nitrate ion by blending the resonance structures into a single resonance hybrid:

The resonance hybrid for the nitrate polyatomic ion is

The actual geometry of the polyatomic ion is trigonal planar with bond angles of 120°.

Resonance Structures and the Resonance Hybrid

Resonance is possible whenever a Lewis structure has a multiple bond and an adjacent atom with at least one lone pair. The following is the general form for resonance in a structure of this type. The arrows show how you can think of the electrons shifting as one resonance structure changes to another.

You can follow these steps to write resonance structures.

For example, the two resonance structures for the formate ion, HCO2− are 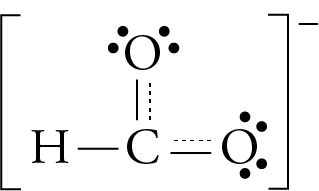 Click here to see a molecular model of the formate ion.

There is a similar situation with oxygen atoms. Although it is possible for oxygen atoms to have three bonds and one lone pair, it is not likely that the second most electronegative element would lose the electron necessary to make this possible. Thus we will eliminate resonance structures that have three bonds and a lone pair for an oxygen atom. For example, formic acid, HCO2H, has a double bond and an adjacent atom with a lone pair, so we might think that it has resonance. The two resonance structures would be

We will consider resonance a possibility for molecules and polyatomic ions that have the following as part of their Lewis structure.

A reasonable Lewis structure for H2NCOCH3 is below. Predict whether it would have resonance. If it does, draw all of the reasonable resonance structures and the resonance hybrid. 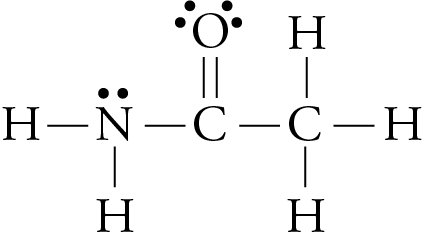 The structure has a double bond and an adjacent atom with a lone pair, so it could have resonance. The possible resonance structures are below.

Using the two resonance structures above as a guide, we get the following resonance hybrid. 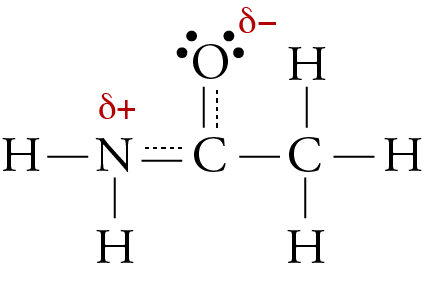 Click here to see a molecular model of acetamide.

When resonance is considered, we add another step to our Lewis structure drawing procedure.

(Remember to add the two electrons for the −2 overall charge.)

Step 5: Because we are short four electrons (or two pairs) to provide octets for the carbon atoms, we convert two lone pairs into bonds.

Step 7:  There are no reasonable alternatives.

Step 8:  With its double bonds and adjacent atoms with lone pairs, our structure meets one of the requirements for resonance. To compose the resonance structures, we imagine the electron pairs shifting as shown by the small arrows below. It is as if a lone pair drops down to form another bond, pushing a bond off to form a lone pair. Remember that we do not believe this is really happening. We just find it is useful to think of resonance structures in this way.

We follow the guidelines to draw the resonance hybrid that summarizes these structures and provides the best description of the bonds in the oxalate ion:

Click here to see a molecular model of oxalate.

Resonance and the Benzene Molecule

It is possible to have resonance without the participation of lone pairs. The most important examples of this are benzene, C6H6, and compounds that contain the benzene ring. Benzene’s six carbon atoms are linked to each other in a six-membered ring. Its Lewis structure is often represented with three double bonds as shown below, but chemists often simplify it by leaving off the element’s symbols and the carbon-hydrogen bonds. 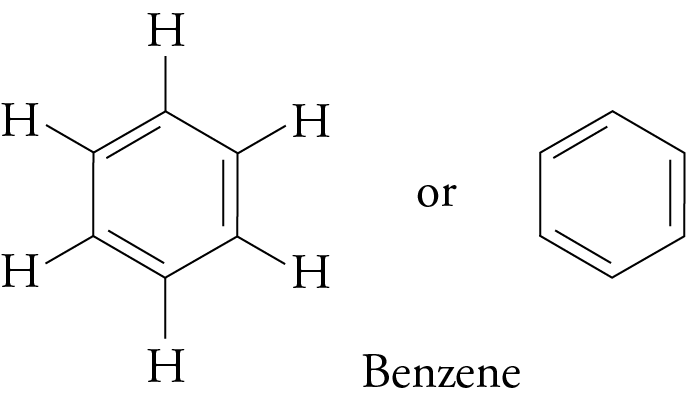 The Lewis structures above depict the benzene molecule as if it contained two types of C-C bonds, double and single. In actuality, all of benzene’s C-C bonds appear to be the same, and we can explain why in terms of resonance. It is as if the benzene ring were resonating between the two structures below.

The resonance hybrid is Structure 3 below. Because it is a bit tedious to draw all the dots, the structure of the benzene molecule is often written as shown in Structure 4, with the dotted lines represented by a circle.

Click here to see a molecular model of benzene.